Large U.S. banks are poised to report weak first-quarter results, as trading revenue and mortgage lending slumped and other businesses couldn’t make up the shortfall.

Among the six largest U.S. banks and securities firms, J.P. Morgan, Citigroup Inc., Goldman Sachs Group Inc. and Bank of America Corp are expected to post a smaller profit than in the same quarter a year earlier. Analysts predict Morgan Stanley’s earnings will be little changed. The five companies all have seen their estimates fall in the past six weeks.

The downcast mood contrasts with last year, when first-quarter profit estimates for all six banks rose between Jan. 1 and the date the companies reported results.

That optimism helped fuel a surge in bank stocks as hopes grew of a sustained banking-sector recovery from the ravages of the financial crisis. But the worsening outlook this year suggests the momentum is fading.

“The easy money has been made on U.S. banks,” said William Fitzpatrick, who follows financial stocks for Manulife Asset Management, which oversees $280 billion.

Only Wells Fargo has seen analysts raise their earnings forecasts this year. It is expected to post a profit slightly greater than the same quarter a year ago, thanks in part to cost cuts and its relatively small trading business, analysts said. 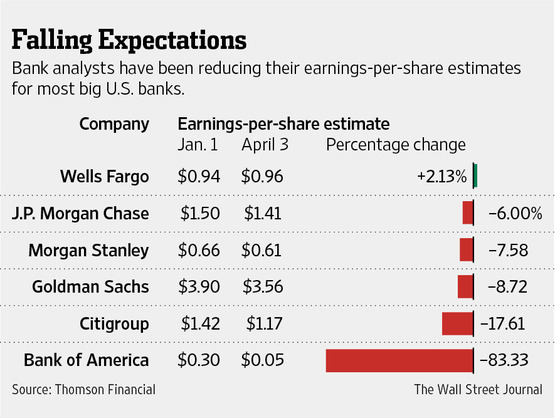 For the other big banks, trading is a big trouble spot. Jason Goldberg, an analyst with Barclays PLC, estimates that fixed-income trading will be down 10% to 20% across Wall Street.

At an investor conference in February, J.P. Morgan executives cautioned that trading revenue was on pace to drop about 15% from a year earlier.

Fretting over turmoil in emerging markets, many investors have pulled back from taking risks, analysts said. Volumes were down in some markets tied to bonds and interest-rate swaps, they said. And currencies turned less volatile, so bank traders found fewer opportunities to profit from movements.

“All things being equal, we’re not putting together a great quarter,” for fixed-income trading, said UBS AG analyst Brennan Hawken.

Analysts’ profit estimates for Goldman, which relies more heavily than its rivals on trading in debt, currency and commodities markets, have slipped 8.7% since Jan. 1.

The New York firm is expected to post a profit of $3.56 a share, down from $4.29 in the year-earlier period. First-quarter revenue forecasts have dropped 4%, on average, since the beginning of the year. Goldman’s shares have slipped about 6% in 2014.

U.S. banks also are contending with a prolonged slowdown in the mortgage business. A slight increase in loans for home purchases in the first quarter hasn’t been enough to offset a plunge in mortgage refinancing, Guggenheim Securities LLC analysts wrote in a note to clients this week.

Rising home prices have also given potential buyers pause, analysts said, and many consumers already have refinanced their mortgages.

Total home-loan volumes, including both refinancing and purchase loans, will fall about 5% from the fourth quarter, according to estimates from analysts at Keefe, Bruyette & Woods.

Bank of America’s mortgage-banking revenue could drop by a third, according to Citigroup analysts. J.P. Morgan could report a 47% decline, the analysts said.

Investment banking is a mixed bag. The fees banks collect from advising companies on mergers and from managing initial public offerings and other stock sales, should show gains from a year earlier, analysts said. Thomson Financial estimated a 4.8% increase in merger-advisory fees, with equity- underwriting fees up 19% from a year earlier.

But the biggest slice of the investment-banking pie remains the debt capital-markets business, which helps companies sell bonds and arrange bank loans. A drop in revenue may offset higher fees from other investment-banking activities.

Nomura’s Mr. Chubak estimates revenue will fall more than 10% at many of the big banks, thanks to a drop in revenue from underwriting high-yield bond offerings and syndicated loans, despite strong investor demand for high-yield debt securities.

Commercial and industrial loans remain a bright spot for the big banks, growing by an estimated 2.5% during the period, according to analysts at J.P. Morgan.

Analysts project net-interest revenue, or the amount banks earn on the loans they make to companies and individuals, to be flat or down slightly.

The tepid outlook for 2014 follows a year in which bank shares surged, with the six biggest banks and securities firms rising an average of 39%. The stocks’ performances so far this year in part reflect each bank’s dependence on the capital markets. Morgan Stanley is down 1.3%, while Bank of America and Wells Fargo are each up nearly 10%. J.P. Morgan has climbed 3.6%.

Banks also remain limited in how much they can reward investors during slow periods by boosting dividends or buying back their own stock.

Last week, the Federal Reserve released its decisions on whether to approve those banks’ plans for 2014. Five of the six biggest banks won approval. Citigroup’s plan was rejected.

Citigroup’s rejection, on concerns over its ability to project losses from its international businesses during an economic downturn, served as a reminder that decisions over dividends and buybacks are now made in government buildings rather than in wood-paneled boardrooms. Citigroup’s shares have dropped 8.8% this year, in part because of the decision.

We want to hear from you!  Would like to share your opinion or make a comment on the Unlock Your Wealth Radio Show? If so, then please leave your comment or questions in the space provided below and share this article with your friends and family on Facebook and Twitter. Your comments or question could be chosen as our featured Money Question Monday and a phone call by financial expert Heather Wagenhals could dial your way to be live on the Unlock Your Wealth Radio Show.