Bleacher Report – One of the key elements in any bout involving Manny Pacquiao is the distribution of money for the fight, regardless of whom the opponent is. Pac-Man is one of the biggest draws in sports, thus he is able to generate a lot of financial interest on his own.

Chris Algieri has had, in boxing terms, a meteoric rise to main event status. He’s not a young, up-and-comer at 30 years old, but it wasn’t until his two wins against Emmanuel Taylor and Ruslan Provodnikovearlier this year that he became someone to watch.

RELATED: Floyd Money Mayweather Earns More in One Minute than Average American Makes in One Year

Despite earning his first high-profile fight, Algieri didn’t show well. Pacquiao came out of the gate strong and showcased his dominance throughout 12 rounds, earning six knockdowns along the way.

While the official purse won’t be known until after the pay-per-view buys are calculated and percentages divided, here are the known particulars for what Pacquiao and Algieri will receive for the WBOWorld Welterweight Championship fight. 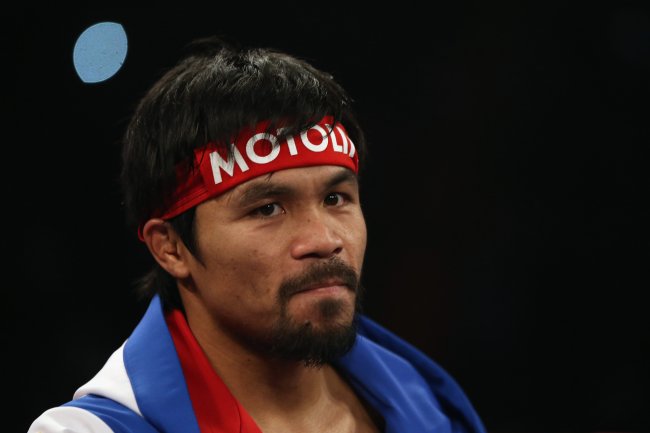 Not that this will come as a shock to anyone who has followed boxing finances over the last decade, but Pacquiao is going to get paid handsomely for this fight. He’s reportedly set to make “not less than $20 million,” according to Top Rank’s Bob Arum (h/t Bev Llorente, ABS-CBNNews.com).

According to a November 2013 report from Kurt Badenhausen of Forbes.com, Pacquiao was going to break the $300 million mark in career earnings for his fight with Brandon Rios in a relatively short amount of time:

Pacquiao received a guarantee of $11 million and his cut of the 1.25 million PPV buys pushed his total earnings to $15 million for the December 2008 fight (vs. Oscar De La Hoya). It was more than triple his previous biggest payday and made Pacquiao an established PPVdraw. It kicked off a series of payouts in the $15-20 million range, including his share of PPV revenue, against Rickey Hatton, MiguelCotto, Joshua Clottey and Antonio Margarito. Those four fights averaged roughly one million PPV buys.

It’s been four years of top-level payouts that have gotten Pacquiao to the position he is in right now as far as career earnings. Boxing is such a unique sport in terms of making money that someone like Pac-Man can go from a few million dollars per bout, as Badenhausen noted, to $20-plus million with one great performance.

Another notable aspect of the contract breakdown, per Arum (h/t LemSatterfield of Ring Magazine), is Pacquiao already had a built-in rematch clause in the event Algieri pulled off the upset:

As far as if Chris Algieri wins the fight from Manny Pacquiao, then there is a provision in the contract for a rematch. And if he then beats Pacquiao and beats Manny in a rematch and Floyd wants to fight [Algieri], that’s not my business. That’s up to Joe DeGuardia, and it’s up to the Mayweather camp.

That’s one part of boxing that can be frustrating, since the marquee fighters have all the power.

RELATED: 14 Celebrities Who Lost It All Financially 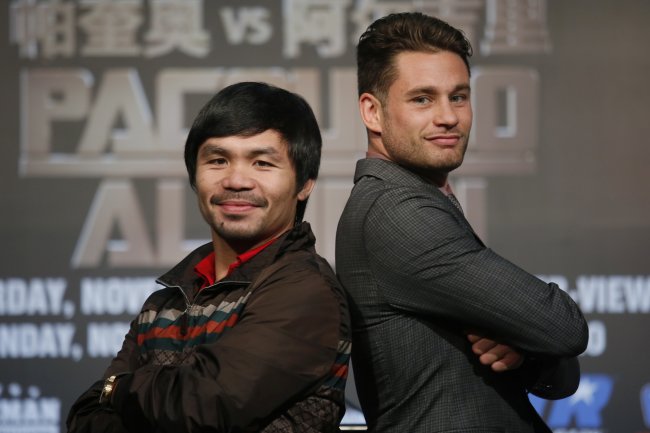 Even though Algieri‘s payout for this fight isn’t in the same vicinity as Pacquiao’s, it’s still more money than he’s ever seen in a single bout.

According to Dan Rafael of ESPN.com, Algieri‘s biggest payout prior to this fight was $100,000 against Provodnikov:

Terms were not disclosed, but DeGuardia said Algieri (20-0, 8 KOs) will earn a career-high payday of more than $1 million. It will be more than 10 times his previous biggest purse, which was $100,000 for his upset split decision win against Ruslan Provodnikov to win a junior welterweight world title on June 14 at the Barclays Center in Brooklyn, New York.

Per Algieri promoter, Joe DeGuardia, via Greg Logan of Newsday, Algieri‘s purse against Pacquiao “exceeds $1.5 million and includes an upside of PPV sales.”

For someone who hasn’t been boxing very long, Algieri has been on a relentless pace. His first official bout, via BoxRec.com, came in April of 2008. Since that time, he has had 20 fights in six years and three in 2014 alone. There’s no doubt the American star is tough, but eventually that wear and tear comes back to get you.

Provodnikov nearly had Algieri finished in the first round when he was knocked down twice. Credit Algieri for getting back up and battling through a right eye that was swollen shut, but it showed cracks in the foundation.

The good news is Algieri does get some financial relief to take time off if he chooses. It also gives him more clout moving forward to keep getting paydays in the seven-figure range. It’s not an equitable split, but Algieri isn’t likely to complain about having a fight with Pacquiao on his resume.