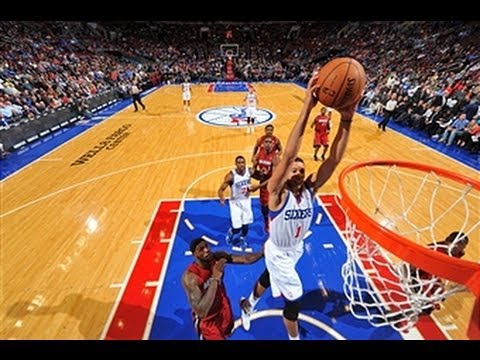 The Blaze – Roughly 60 percent of all professional basketball players in the United States file for bankruptcy within the first five years of retirement, according to Sports Illustrated.

But with the help of his mother, Philadelphia 76ers rookie Michael Carter-Williams hopes to avoid that trend.

The 22-year-old basketball player, who is guaranteed an impressive $4.5 million over his first season, has decided to rely solely on his earnings from Nike and Panini trading cards endorsements, according to the Philadelphia Inquirer.

So what about his salary?

Carter-Williams, with the help of his mother, decided recently to lock most of the $4.5 million away in a trust fund for the next three years — and he can’t touch a cent of it.

“With rookie contracts capped in the NFL and NBA, the ultimate financial success of many careers are determined by the second pro contract,” said Matt Dzamba, director of sports marketing at Zambezi, according to The Daily Mail.

RELATED: Only 5 Current NBA Players Make More In Salary Than Shaq Does In Retirement

“Protecting the first contract by essentially locking it up takes a lot of pressure off the player both on and off the court,” he said.

The rookie’s mother, Mandy Carter-Zegarowski, and her friend run his management team.

“Our goal is to work with Michael to manage his money in a way that will secure his long-term financial future,” Carter-Zegarowski said in a statement obtained by ABC News. “Right now, the focus is not only to save as much as possible, but also to use his unique position to serve as a role model and give back to the communities that continue to support him and his career.”

The idea is simple: Protect the young athlete from living a costly and unwise lifetsyle.

Financial experts, including attorney Kelly Phillips Erb, believe the move is definitely out of the ordinary. But considering the trend of wealthy athletes and entertainers facing financial failure, Carter-Williams’ financial move would seem to make sense.

“Even if an athlete has a million dollars today, it has to last until you’re 65,” said Erb, according to the Mail, agreeing that the rookie’s parents most likely set up the trust to keep his cash safe from unwise spending.

“In professional sports in particular, you’re going to have health problems and your knees are going to go out,’ she said. “His parents are very smart to know he has a shelf life though they hope he’ll go on to good things. But they don’t want him to blow his money on a Lamborghini.”

Provided Michael Carter-Williams budgets wisely and listens to sound financial advice, he will join with at least one other major athlete in avoiding the bankruptcy pitfall common to so many sports stars: Troy Polamalu.