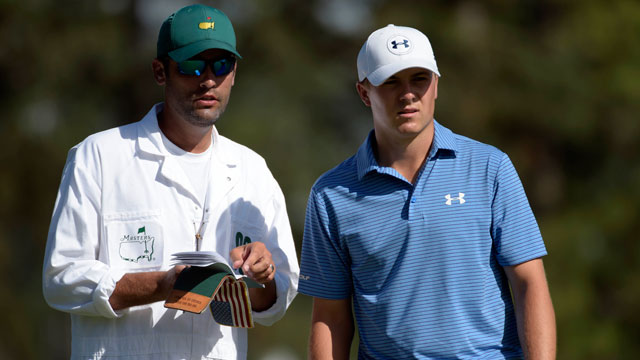 Masters champion caddie, Michael Greller, who carried Jordan Spieth’s bag in Spieth’s historic performance at the 2015 Masters, might be 16 years older than his boss, but even less experienced.

Greller caddied for the first time in 2006, according to Brian Costa of The Wall Street Journal, when he was watching the US Amateur Public Links Championship as a spectator and decided to hop across the ropes and caddie for a kid who was carrying his own bags.

RELATED: Only 5 Current NBA Players Make More In Salary Than Shaq Does In Retirement

He kept at it as something of a hobby, and in 2011 he found himself carry Spieth’s bag in the US Junior Amateur. When Spieth turned pro in 2013, he asked Greller to leave his real job and work for him.

Greller told Jason Sobel of the Golf Channel in 2013 that he initially intended to take a one-year sabbatical from school. But while watching the 2013 Masters, he decided he did not want to give up an opportunity to help Spieth win a green jacket one day.

I loved what I did, but I was ready to try something different. Ellie, my wife, was watching the Masters with me in the spring. She said, ‘If Jordan is winning the Masters in 10 years, are you going to be like, why didn’t I pursue that?’ I know I’d be kicking myself.

Greller’s wife’s question proved prophetic, though it didn’t take Spieth 10 years to win the Masters: It took him two.

RELATED: How to Negotiate a Better Salary Greller told The Journal he saw his job as more of a personality manager than a golf expert. As anyone who witnessed Spieth talking to his ball on nearly every shot at Augusta (even the good ones) can tell you, the 21-year-old expects a lot of himself.

“I just try to be a calming influence on him. He’s very intense,” Greller told The Journal.

“We give each other a lot of crap,” Greller told Sobel in 2013. “It’s almost like a brother situation. We fight over the dumbest things, like sports.” While we don’t know the exact details of Greller’s contract with Spieth, it’s fair to say he’s making more now than he could have teaching. According to Golf Digest’s Undercover Pro, caddies on the modern PGA Tour typically get paid a base salary of $1,300 to $1,800 per week with additional results-based bonuses. Traditionally, that bonus structure is 5/7/10 (5% of winnings for a made cut, 7% of winnings for a top-10 finish, and 10% of winnings for a tournament win). But both the Undercover Pro and long-time caddie Kip Henley say caddies for top players are making more than that these days.

In the past 30 days Spieth has two second-place finishes and two wins, including the Masters (a $1.8 million prize), for $4.1 million in winnings. Under the traditional rates, Greller stands to have made ~$375,000 in performance bonuses alone during that period.

Not too shabby for someone who went to the Masters as a fan three years ago.