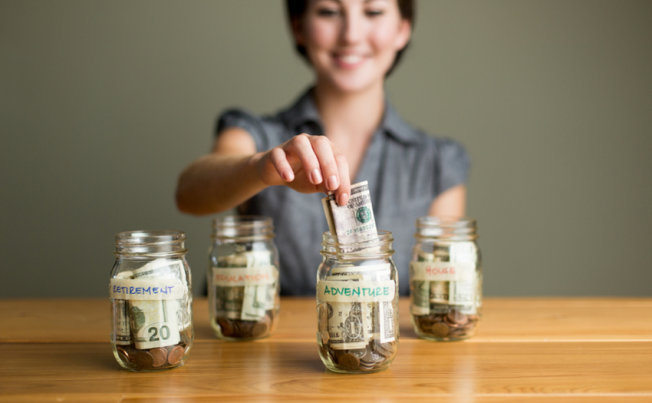 The millennial generation (also known as Generation Y) often gets a bad rap for being overeducated, underemployed, entitled, lazy and narcissistic. Ouch. But recent buzz over one such millennial who works for Google and lives in the back of a truck has shed light on a segment of millennials who are embracing a different lifestyle.

They’re residing in sparse, tiny houses, and living under self-imposed, multiyear shopping bans. They are even clipping coupons.

“Millennials are really innovative when it comes to saving,” Stefanie O’Connell, a millennial financial expert and author of “The Broke and Beautiful Life,” told TODAY.com.

Indeed, the 2015 Northwestern Mutual Planning & Progress Study found that 53 percent of millennials — those born between 1980 and 1995 — have set financial goals, compared to just 38 percent of folks age 35 and older. And 64 percent say they are more inclined to save rather than spend.

Cait Flanders, 30, is proof of the trend. The Canadian writer is currently living under a two-year shopping ban. That means no new shoes, takeout, Starbucks or books — and she’s still saving 25 percent of her income.

Anna Newell Jones, the creator of savings blog “And Then We Saved,” adopted a similar year-long program while living in Denver in 2010. Calling it a “Spending Fast,” Newell Jones lived on only a list of limited expenditures like rent, bus passes and store-bought food, and put every extra dime toward reducing her mountain of debt.

After she paid off her almost $20,000 balance, she adjusted to a slightly less strict spending diet. O’Connell was so bent on staying debt-free that she sublet her apartment and couch surfed, took advantage of New York’s resources to score free haircuts (beauty school students), shared rides, babysat to earn extra cash and rarely went out. So much shrewdness earned her a reputation as “the frugal friend,” she said.

“It’s efficient,” Newell Jones told TODAY. “And by making that one decision to ‘fast,’ I ended up making a million little decisions about fancy boots or clothes, because the answer was always no.”

And neither Flanders nor Newell Jones is going back to their old spendthrift ways. Newell Jones and her husband are currently building a tiny house after having also rid their home of extraneous clutter. Flanders got rid of 75 percent of her stuff and said that adopting a minimalist lifestyle actually freed up a lot more than counter space.

“Minimalism is about more than just stuff,” said Flanders. “It’s about removing all the excess in our lives, so we can focus on what really matters.”

O’Connell agrees and says that by saving for the future, avoiding any kind of debt and limiting consumerism, “millennials are showing our value system through our actions.”

She added, “We are concerned with building personal capital rather than accumulating stuff.”

Scott Rick, assistant professor of marketing at the University of Michigan’s Ross School of Business, said it’s all well and good that millennials are dedicated to an extremely economical lifestyle. But, he says, eventually “they will age out of it.”

“But if you are in a stage of life and you want to free up money for travel or life experiences instead of mowing lawns, it makes a lot of sense,” said Rick.

He also noted that part of the maximum miserly movement may be related to its current popularity on social media and television — a self-fulfilling prophecy of sorts.

So while living in a vehicle on your employer’s parking lot might have seemed unimaginable just a few years ago, “extreme isn’t so extreme anymore,” said O’Connell.

And another bonus? Rick also found that savers are viewed as more romantically appealing than spenders.

We want to hear from you!  Would like to share your opinion or make a comment on the Unlock Your Wealth Radio Show? If so, then please leave your comment or questions in the space provided below and share this article with your friends and family on Facebook and Twitter. Your comments or question could be chosen as our featured Money Question Monday and a phone call by financial expert Heather Wagenhals could dial your way to be live on the Unlock Your Wealth Radio Show.