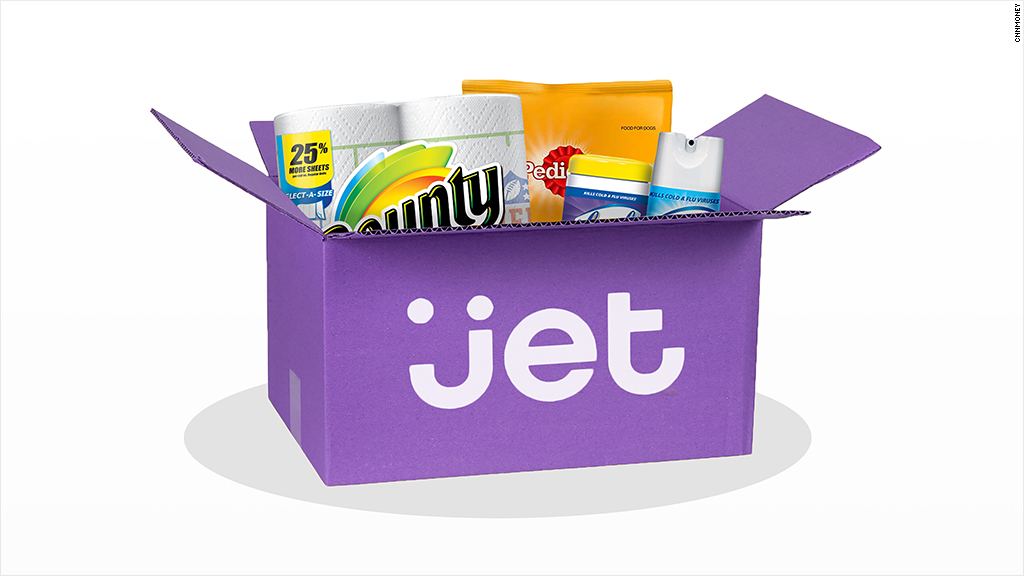 Walmart will acquire e-commerce start-up Jet.com in a $3 billion cash deal aimed at helping the world’s largest retailer become an online shopping powerhouse that can take on Amazon.com.

The deal announced Monday marks the latest move by Walmart, known for breakthroughs in efficiency that have given it a pricing edge across its vast store network, to try to bring the same spirit of innovation to its Web operations. Online sales are still just a fraction of Walmart’s overall business, coming in at $13.6 billion last year out of $482 billion in total revenue. Amazon hit more than $100 billion in sales in 2015. Walmart is the second-most trafficked retail website in the U.S. behind Amazon.

RELATED: How To Save Money at Walmart

Walmart will keep Jet as a separate brand but plans to tap into Jet’s bulk ordering strategy to grow its e-commerce business at a faster rate and reach more Millennial customers. Jet also appeals to a more affluent shopper than Walmart, with customers more likely to have annual incomes greater than $150,000, according to data from NPD Group.

“Walmart.com will grow faster, the seamless shopping experience we’re pursuing will happen quicker, and we’ll enable the Jet brand to be even more successful in a shorter period of time,” Walmart CEO Doug McMillon said in a statement.

The deal comes a little more than a year after Jet CEO Marc Lore co-founded the company as a competitor to Amazon and even Walmart itself. Walmart will throw in another $300 million in shares paid out to Jet over time, according to the terms announced Monday. Walmart said it expects to receive regulatory approval for the deal, which is expected to close this year.

Jet sells everything from household goods and groceries to electronics and furniture. It aims to be cheaper than its competitors by using a model that gives customers a bigger discount when more items are added to an order. Walmart will look into adopting that strategy for its website once the deal is finalized, Walmart spokesman Dan Toporek says.

Walmart was drawn to Jet for its philosophical synergies with Walmart’s “everyday low prices” motto.

“The customer is even more in charge of the price that they pay,” McMillon said on a call with media Monday. “There’s really an empowerment there for customers that we like.”

But the biggest asset Walmart gains by paying $3 billion for a company whose business model is largely unproven is creative brain power, says Sucharita Mulpuru, retail analyst with Forrester.

Lore will remain with Jet and also take on the role of overseeing Walmart’s U.S. e-commerce business. He previously co-founded Quidsi, the parent company to websites including Diapers.com and Soap.com that he sold to Amazon for $545 million in 2010.

“You know that he is a smart guy that can execute,” Mulpuru says of Lore. “What Walmart needs is an innovation machine that consistently is putting out something new every single week.”

While the acquisition can boost Walmart’s cachet as an online retailer, it won’t come close to unseating Amazon, says Charlie O’Shea, lead retail analyst for Moody’s.

“No one catches Amazon online,” he says. “The key is to be No. 2. (Acquiring Jet) helps differentiate Walmart and give it a leg up on its brick-and-mortar brethren.”

Jet faced several hiccups in its first year in business, including abandoning its initial plan to charge customers a $50-per-year subscription fee to shop with the site. That led to skepticism over whether the company would be able to generate enough profit to stay in business.

Cozying up to Walmart gives Jet an opportunity to pad its margins by leveraging Walmart’s vendor relationships and distribution network to get goods at a cheaper price, O’Shea says.

Why Building Wealth is More Than Mindset

Why Building Wealth is More Than Mindset