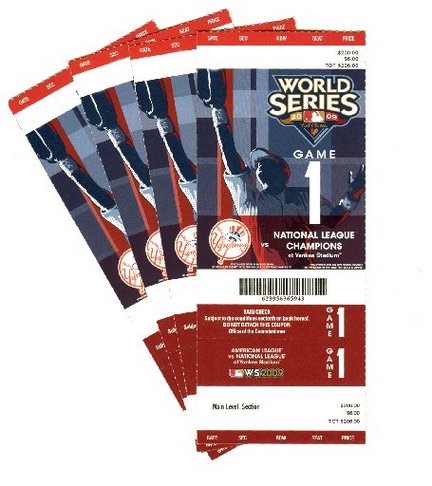 The Chicago Cubs punched their ticket to the World Series Saturday night with a 5-0 victory over the Los Angeles Dodgers to clinch the National League Championship Series four games to two.

This sets up a World Series matchup of two famously title-starved franchises. Chicago’s North Side team is gunning for its first World Series victory since 1908 and has not even qualified for the Series in 71 years. The Cleveland Indians’ own title drought stretches back to 1948 when they won their second and last World Series. History is going to be made over the next ten days and will be the most expensive event in the history of baseball.

“This will smash every other World Series pricing, by every measure. I doubt it will ever be broken. Nearly 200 years of combined pent-up demand won’t ever happen again in any sport,” says Jesse Lawrence, founder and CEO of TicketIQ, which works with more than 50 sports teams to help them analyze and sell their tickets directly to fans.

The average sale price for the three games at Wrigley is $3,870, more than double the previous World Series record.

The average sale price for the first World Series game at Wrigley Field since 1945 on the secondary market is $4,080, according to TicketIQ data. This is Game 3 overall as the first two games are in Cleveland. The current average asking price for the game is $6,154 as sellers try and capture eager fans who want to be a part of history with the minimum to get in Wrigley a shade under $2,000 for Game 3.

Chicago Cubs fans celebrate outside of Wrigley Field after the Chicago Cubs defeated the Los Angeles Dodgers to the World Series against the Cleveland Indians. (Photo by Jamie Squire/Getty Images)

The excitement in Cleveland is nearly as robust, as the city had a 52-year title drought overall in major sports before the Cleveland Cavaliers won their first NBA title in June. The Cavs kick off the season Tuesday night when the Series opens. As it became apparent that the World Series would open in Cleveland, prices dropped dramatically for the Cavs opening night at Quicken Loans Arena, which includes the team’s ring ceremony and a halftime performance by hip-hop artist Flo Rida.

Tuesday is still the second most expensive ticket on the Cavs schedule this year at more than $300 on the resale market. The NBA Finals rematch with the Golden State Warriors is the richest at $477. The Cavs moved up their start time to 7:30 to accommodate the crowds at the two venues, which are next to each other.

The Indians have a chance to be the most expensive World Series tickets since 2010, outside of the Cubs. The previous highs were $1,661 (San Francisco 2010), $1,627 (New York Mets 2015) and $1,613 (Boston 2013). The Cubs will crush these previous numbers. The most expensive World Series single game previously was $1,810 for a potential Game 7 in 2010 featuring the Texas Rangers at the San Francisco Giants. The game never happened as the Giants won the Series in five games. The Giants had their own 56-year title drought before then win.

Indians’ ticket pricing would have taken a hit if the Dodgers had beaten the Cubs, but the Cubs NLCS win will keep pricing sky high. Fans shut out of Wrigley can make the five-hour drive to Progressive Field to catch some World Series action. Even at more than $1,600 a ticket, it is a bargain from what you can get at Wrigley.